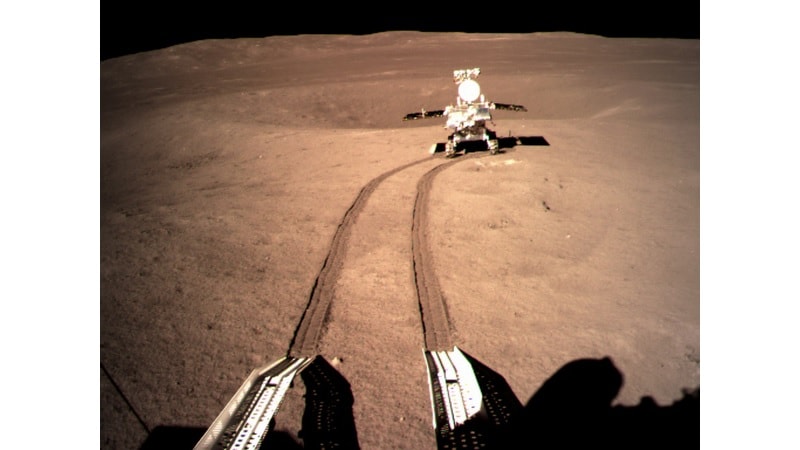 China’s lunar rover has left the first-ever “footprint” on the far side of the moon, officials said Friday, hours after the robotic spacecraft successfully soft-landed on the mysterious and previously unexplored region of the Earth’s satellite.

The Chang’e-4 spacecraft scripted history on Thursday when it made the first-ever soft landing on the far side of the moon. Named after a Chinese moon goddess, the spacecraft comprises a lander and a rover.

“Lunar rover Yutu-2 or Jade Rabbit-2, left the first-ever ‘footprint’ from a human spacecraft on the far side of the moon late at night on Thursday, after it separated from the lander smoothly,” state-run Xinhua news agency reported. The rover touched the lunar surface at 10:22pm (local time) on Thursday, leaving a trace on the soft, snow-like surface. “The process was recorded by the camera on the lander and the images were sent back to the Earth via the relay satellite ‘Queqiao’,” the report said, quoting China National Space Administration (CNSA).

After the successful landing, experts verified the conditions of “Queqiao”, meaning Magpie Bridge, which was launched in May of 2018 to set up the communication link between the Earth and the moon’s far side. They also verified the environment parameter of the landing area, the conditions of the probe’s equipment as well as the angle of incoming sunshine to make preparations for the separation of the lander and rover, the CNSA said in a statement.

The experts then sent the separation order to the spacecraft via “Queqiao”. After receiving the order, Yutu-2, atop the spacecraft, extended its solar panel, stretched out its mast and started to drive slowly to the transfer mechanism, according to the Beijing Aerospace Control Center.

The Yutu-2 rover has six wheels that all have power, so it can continue to operate even if one wheel fails. It can climb a 20-degree hill or an obstacle up to 8 inches tall. Its maximum speed is 200 metres per hour.

In Chinese folklore, Yutu is the white pet rabbit of Chang’e, the moon goddess who lent her name to the Chinese lunar mission. Legend has it that Chang’e, after swallowing a magic pill, took her pet and flew toward the moon where she became a goddess and has lived with the white jade rabbit ever since.

The Chang’e-4 probe which has already sent back its first close-up pictures from the surface is carrying instruments to analyse the unexplored region’s geology and will conduct biological experiments.

The pioneering achievement is another demonstration of China’s ambitions to be a space power. The country aims to land a crewed flight on the moon in the coming decade. The successful landing formally inaugurated the world’s first expedition to the far side and is expected to fulfil scientists’ long-held aspiration to closely observe the enormous region.

Since the moon’s revolution cycle is the same as its rotation cycle, the same side always faces the Earth. The other side, most of which cannot be seen from the Earth, is called the far side or dark side because most of it is uncharted.

Chang’e-4 includes two main parts: the main lander weighing about 1,088 pounds and a 136-kilogramme rover. By comparison, NASA’s Opportunity rover on Mars weighs about 181 kilogrammes, and the Curiosity rover there is much bigger, at 908 kilogrammes.

The spacecraft is largely a clone of Chang’e-3, which landed on the moon in 2013. The first Chang’e spacecraft was launched in 2007 to verify China’s lunar probe technology, obtain lunar images and perform scientific surveys.