Food that tastes so nice, you say it twice: Burma Burma

Myanmar, or erstwhile Burma, is a country shaped by many influences and Burmese food as opposed to its common perception of it being an ineligible straggler in the hierarchy of Asian cuisines is actually a beautiful medley of cultural mix. Influenced by rich flavours from countries such as India, China and Thailand, Burmese cuisine has its own unique qualities – it is richer than authentic Chinese food but less spicy than Indian and Thai cuisines.

Considering a country that was isolated for almost 50 years owing to a repressive military dictatorship, the tide is slowly turning in the golden land in terms of food culture and has even crossed borders. Now, more and more people are experimenting with the hidden glory of its diverse and interesting culinary traditions. In India, two friends, Ankit Gupta and Chirag Chhajer, are responsible for starting the Burmese food revolution. The duo who started out with the restaurant Burma Burma in Mumbai three years ago, followed by a lucrative franchise in Gurugram – the only dedicated Burmese eatery in Delhi NCR other than Burmese Kitchen which takes orders for home delivery – has got an overwhelming response over the years, even though they serve only vegetarian fare. Now, Burmese cuisine has a lot of seafood influence, especially in the coastal towns of Mawlamyine, Thandwe, Ngwesaung and in the villages of Inle Lake but the decision to serve veg food is purely from a business perspective. Burmese cuisine is richer than authentic Chinese food but less spicy than Indian and Thai cuisines.

How did he come across this idea? Gupta decided to tap into the Indian market as he knew that the food is easily adaptable since it has a lot of similarities to Indian food. Also, his life has had a major Burmese influence as his mom is Burmese. She had come to Mumbai in the early 1960s, when regional insurgencies escalated in the country. To cut the long story short, it was to escape the military junta’s tyranny and their unendurable attitude towards pro-democracy movements.

So, what exactly do they have to offer? There are dishes from the state of Kachin like the Kachin Style Dried Mustard Soup which instantly wakes you up owing to its umami flavour, Khowsuey from the Shan State and other delicacies which trace its roots back to Bagan, Chin, Rakhine, Yangon, and Inle Lake. There is also the hot favourite Mohinga, a dish made of rice noodles in a rich broth of onions, garlic, ginger, and lemongrass, topped with deep-fried fritters of banana stem. Considered by many as a national dish, it is eaten at breakfast in Myanmar, or any other time during the day, really. We tried it out at Burma Burma and loved it. If you ask us, it can easily pass off as a breakfast of the champions as it’s really wholesome.

While we were enjoying sour and savoury dishes with the rest of the world trying to catch up with Burmese cuisine, we asked head chef Ansab Khan if the food is authentic or has it been modified to suit the Indian palate, to which he said, “80-90 per cent of the menu is very close to what you get in Burma; the core ingredients of the dishes are something we source from there.” 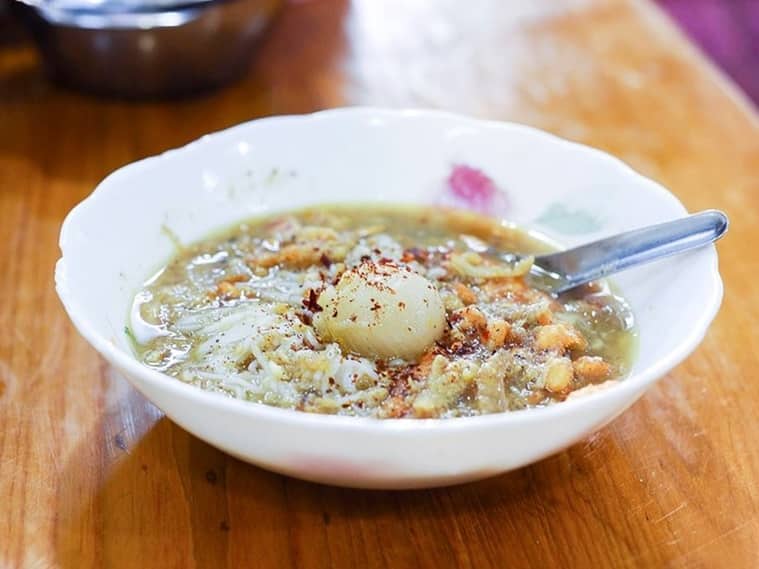 Considered by many as a national dish, Mohinga is eaten at breakfast in Myanmar, or any other time during the day.

Gupta’s mother and her relatives who trained the staff since its inception keep a check on the flavours every couple of months. The team at Burma Burma also does regular checks to make sure the authenticity of flavours is maintained, even if it means going back to Myanmar and training there with the locals. We still had our doubts so we approached a few customers who revealed that they visit the restaurant often and it’s pretty close to what food tastes like back in Myanmar.

One of them who goes by the name of Shreekant Amdoskar said, “I had Burmese food while I was travelling with my wife within the country in 2015. Since both of us are big time foodies, we tried almost everything that was edible. From restaurants to street food, we had an amazing time exploring the local cuisines. Mohinga is my all-time favourite. It’s good to see what Burma Burma is offering to its customers here in India has an incredible touch of authenticity to it, even though they try new things from time to time. The curated menu for the Thingyan Festival which took place in May this year had some new elements at play like Laphet Hatmin Kyaw (Fried Rice with Pickled Tea Leaf) but it still had a strong Burmese touch to it.”

For their menu, both à la carte and special ones, the owners and chef take inspiration from the different regions and even follow street food culture where you find everything from staple Banana Pancakes to Burmese Samosas. Khan says, “Back in Myanmar, the food culture has apparently been changing with modern influences coming in.” But even today, a typical meal consists of a soup, salad, a non-veg main dish, with side dishes of vegetables and a generous helping of boiled rice. Since Myanmar sits on the eastern edge of the Indian Ocean and its north lies wedged between India and China, many dishes carry the flavours and scents of both. At some point, you might even find okra and turmeric of Bengal in a stew. There’s also the popular samosa! No Burmese meal is complete without Khowsuey.

For those who aren’t aware, Burmese cuisine has strong, pungent flavours and uses a lot of fresh ingredients, tropical fruits and peanuts. They are also big on spicy, sour and crunchy thoke (salads) and can prepare one with almost anything under the sun. The Le Thok Son/Rainbow Salad that we had at the restaurant was a delightful mix of four type of noodles – glass noodles, flat rice noodles, wheat noodles and regular noodles – which came beautifully garnished with raw papaya, cucumber, bean sprouts, potato and carrots with a dollop of jasmine rice.

While we were at it, we also decided to go for Khowsuey as a Burmese meal cannot be complete without it. The Dry Khowsuey and Oh No! Khowsuey soon arrived at our table with a generous helping of peanuts sprinkled on top! Let’s remind you that peanuts are an important part of their cuisine and so are tea and rice. While rice is consumed in the form of glutenous rice cakes or noodles, teahouse culture is an integral part of the country. You can usually find tea shops all over the place with just a few stools set up around a street stand. Chinese tea is popular but another one on the list is the black tea served over a layer of sweetened condensed milk, just like the Vietnamese Ca phe sua da. There’s also the bitter and tart pickled tea leaves called lahpet which is used extensively in dishes, starting from salad to rice. It can also be eaten on their own as a snack or at the end of a meal.

We decided to opt for Laphet Hatmin Kyaw/Fried Rice with Pickled Tea Leaf. The first thing which hit us is the strong flavour of the dish – it’s definitely not for the faint-hearted. In this case, the tea leaves added a bitter taste but you can easily get around it by pairing it with an accompaniment. Tofu with Roselle leaf was our first choice owing to its tangy taste. Usually, in Myanmar, people add bamboo shoot to it but the chef decided against it. Nevertheless, it made for an interesting tasting session. We ended our meal with the delicious Coconut Ice Cream and Black Sticky Rice made with mandarin and brown sugar – it was a match made in heaven. 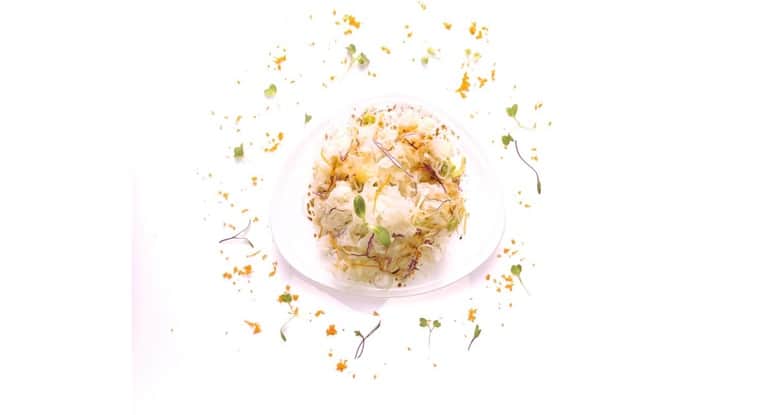 Burmese people are big on spicy, sour and crunchy thoke (salads) and can prepare one with almost anything under the sun.

After all the indulgence, we would say that we are a true fan of veg Burmese cuisine but the one thing we are on the look out for is non-vegetarian food from the country. We would definitely like to try the Htamin Jin – a specialty of the Tibeto-Burman ethnic group Intha which is made of fermented rice and boiled fish coupled with a few other ingredients. After all, Myanmar cuisine is marked by extensive use of fish sauce and ngapi (a paste made from salted, fermented fish or shrimp). If veg food tastes so good, it’s hard to imagine how delectable the cuisine that hinges on mildly hot and tangy flavours would taste coupled with some meat.